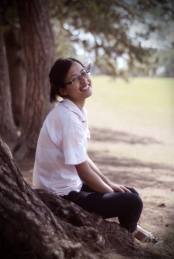 Onto the Next Horizon

Yesterday was the last day of my exams and it was a relief. Four days of back to back papers and term papers makes every exam I’ve appeared for so far, look like a walk in the park. Add to that an ill-timed attack of the cold and cough and I was effectively hindered. Not a good semester for me, it seemed. The last paper was quite tricky. If there was one thing I’d learnt ever since arriving at the university I’m in now, it’s that one should never think that they know enough about anything. I still find that I am quite ignorant about the world around me, where everything is cutthroat. And for someone who came from a different world, it was a bit of a nasty shock.

Today, my friend and I decided to go for a morning walk to clear our heads after nights of feverish reading and preparations. I found it a spooky experience, as we walked along the pathways I thought I knew like the back of my hand. Throughout my stay, I had only seen the place flooded with sunlight, soaked in rain or coloured with dusk; never have I seen it shrouded in stillness so eerie and peaceful at the same time. The paths which branched out in different directions receded into the inky shadows and the darkness seemed capable of swallowing anything that walked into it. I am ashamed to say that though I have never been one who endorses in beliefs of ghosts, spirits and whatever that’s associated with a life beyond the grave, that moment made me hyper-aware of my surroundings. The slight crackling of a leaf getting stepped on, the whoosh of a breeze teasing the foliage, distant footsteps that reverberated in the ground; every single sound or movement made me glance over my shoulder one too many times. Even my friend’s assurances that there was nothing to be afraid so did little to soothe my paranoia. However, the sky started to lighten up, the midnight blue softened to lighter shades as we walked together in companionable silence. When we reached the hostel, we agreed to stay for the sunrise as well. No use going back to sleep when in an hour’s time, we’d be getting breakfast.

The horizon blushed orange when we reached the rooftop. Breathtakingly beautiful and calming! And I realized that it was the perfect way to begin the ending of the 2014 chapter of our lives. I have been struggling with feelings of insecurity and uncertainty for quite some time and it showed in my inability to work on anything I had planned to accomplish. But that simple moment made me realize that it doesn’t matter at all. That’s not how one should live. Not by regretting, or looking back with hopes that we will somehow end up in some place we wanted to be but couldn’t. Not by thinking that it’s impossible to change what had transpired so far and resigning ourselves to simply living. By not getting discouraged when we’re at the lowest point of our lives but knowing that it always gets better as we go.

A year ago, I was reluctant to open myself to new experiences and I was craving for the familiar faces, sights and smells. Now, I realize that my life is going to go through its cycle of change in a few months’ time. Everything is transient yet we are hardly aware of it. I have friends who are going through the exact same motions I went through some time ago. I know that it’ll get better for all of them, the same way it got better for me. For me, the place I had felt out-of-place initially is now a second home to me. Leaving it would mean leaving all the kind people I have encountered but they will remain. In their own small way, they have left their impressions on me, postcards that I treasure in my heart.

And so, as I watched the horizon emit a stronger glow, I felt a secure sense of security in life that I know is going to help me in the days to come. Yes, there’ll be moments of darkness where I’ll have to find my way, stumbling in the dark. But there will be good times as well. An occasional helping hand, a small act of kindness from some stranger that I will encounter in future, as I keep moving on. And in time, it will be me who is going to be that kind stranger to some other lost soul. We keep taking and giving as we move on and we take each and every precious moments of happiness and keep them close to our hearts for inspiration.

And that’s the purpose of a journey, isn’t it?

I am the Founder of "Imagination Breathing" (www.imaginationbreathing.com) and I am so grateful you're here to be part of this awesome community. I'm proud to say that Imagination Breathing has been viewed in over 100 countries. I believe that - “Your insight may be just what someone else needs to have a breakthrough”. View all posts by paulib005